Pregled disertacije
JavaScript is disabled for your browser. Some features of this site may not work without it. 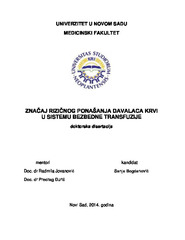 The availability of sufficient quantities of safe blood is the main goal of transfusion services as well as medical institutions that use blood and blood components in treatment of patients. In order to minimize the risk of transmission of transfusion transmitted infections (TTI) during transfusion therapy, WHO has promoted and recommended collection of blood from volunteer blood donor (VBD) from population groups with low-risk behavior who give blood for altruistic motives. The study was aimed to examine knowledge about TTI, type and prevalence of specific forms of risky behavior (RB) and the approach and opinion on the safety of transfusion therapy of VBD in Vojvodina. Material and methods: A prospective multicenter cross-sectional study was conducted in Blood Transfusion Institute of Vojvodina and Transfusion services at nine general hospitals in Vojvodina during the period October 1, 2012 through April 30, 2013. 1191 VBD who voluntarily and anonymously fulfilled specially created a...nd validated "Questionnaire for voluntary blood donors" were included in this study. Acquired data were analyzed using appropriate statistical nonparametric tests. Results: 90 percents of VBD have answered to be informed about the conditions for blood donation. The most frequent sources of information were brochures (32 percents), general practitioner (25 percents), family member or friend (23 percents) and lectures (22 percents). All offered statements regarding TTI have been answered correctly by 75 percents of VBD. Established forms of RB have been reported as follows: often and very often usage of alcohol in 0.25 - 4 percents V D; "h r " "l ht" drug usage in 1 percents and 8 percents, respectively. Sexual relationship with a person known to be drug addicted, with a person known to changing partners frequently, with an unknown person following last blood donation, have been reported in 1 percents , 9 percents and 2 percents, respectively. 8 percents of VBD has changed sexual partner during the last six months; 6 percents have had 2 or more sexual partners simultaneously; 1 percents have paid for intercourse and 1 percents have had sexually transmitted disease. 0.44 percents VBD has received money for sexual favors. A positive attitude and thinking regarding their impact on the safety of transfusion therapy has not been reported by 1 percents to 7 percents of VBD. Conclusion: VBD in Vojvodina are mostly well informed about conditions for blood donation and TTI. However, significant proportion of VBD in this study has not been aware of their impact on the safety of transfusion therapy. VBD with risky behavior, who have not been detected during the standard recruitment procedure, represents potential risk for safe blood transfusion. Therefore, there is a continuous need for promotion and improvement of active participation of VBD in the selection process.